This topic explains how to experiment with and Hyper-Threading Technology for Pexip Infinity Conferencing Node VMs, in order to achieve up to 50% additional capacity.

If you are taking advantage of hyperthreading to deploy two vCPUs per physical core (i.e. one per logical thread), you must first enable NUMA affinity; if you don't, the Conferencing Node VM will end up spanning multiple NUMA nodes, resulting in a loss of performance.

Affinity does NOT guarantee or reserve resources, it simply forces a VM to use only the socket you define, so mixing Pexip Conferencing Node VMs that are configured with NUMA affinity together with other VMs on the same server is not recommended.

NUMA affinity is not practical in all data center use cases, as it forces a given VM to run on a certain CPU socket (in this example), but is very useful for high-density Pexip deployments with dedicated capacity.

This information is aimed at administrators with a strong understanding of , who have very good control of their VM environment, and who understand the consequences of conducting these changes.

Please ensure you have read and implemented our recommendations in Achieving high density deployments with NUMA before you continue.

If you are using vSphere 6.5 or earlier, we recommended that you use the VMware vSphere Flash-based web client in order to perform this configuration.

NUMA affinity for Pexip Conferencing Node VMs should only be used if the following conditions apply:

We will configure the two Conferencing Node VMs (in this example, an E5-2600 CPU with two sockets per server) with the following advanced VMware parameters:

Conferencing Node A locked to Socket 0

Conferencing Node B locked to Socket 1

You must also double-check the flag below to ensure it matches the number of vCPUs in the Conferencing Node:

For example, it should be set to 24 if that was the number of vCPUs you assigned.

Note that if you are experiencing different sampling results from multiple nodes on the same host, you should also ensure that Numa.PreferHT = 1 is set (to ensure it operates at the ESXi/socket level). See https://kb.vmware.com/s/article/2003582 for more information.

Before you start, please consult your local VMware administrator to understand whether this is appropriate in your environment.

It is very important that you actually set numa.nodeAffinity to 1 and not 0 for the second node. If both are set to 0, you will effectively only use numa node 0, and they will fight for these resources while leaving numa node 1 unused.

You must now increase the number of vCPUs assigned to your Conferencing Nodes, to make use of the hyperthreaded cores. (Hyperthreading must always be enabled, and is generally enabled by default.)

First you must check how many logical processors each CPU has.

In the example screenshot below, the E5-2680 v3 CPU has 12 physical cores per CPU socket, and there are two CPUs on the server.

In this case 2 x 12 = 24 is the "magic number" we are looking for with our Conferencing Nodes - which is double the amount of Cores per Socket. 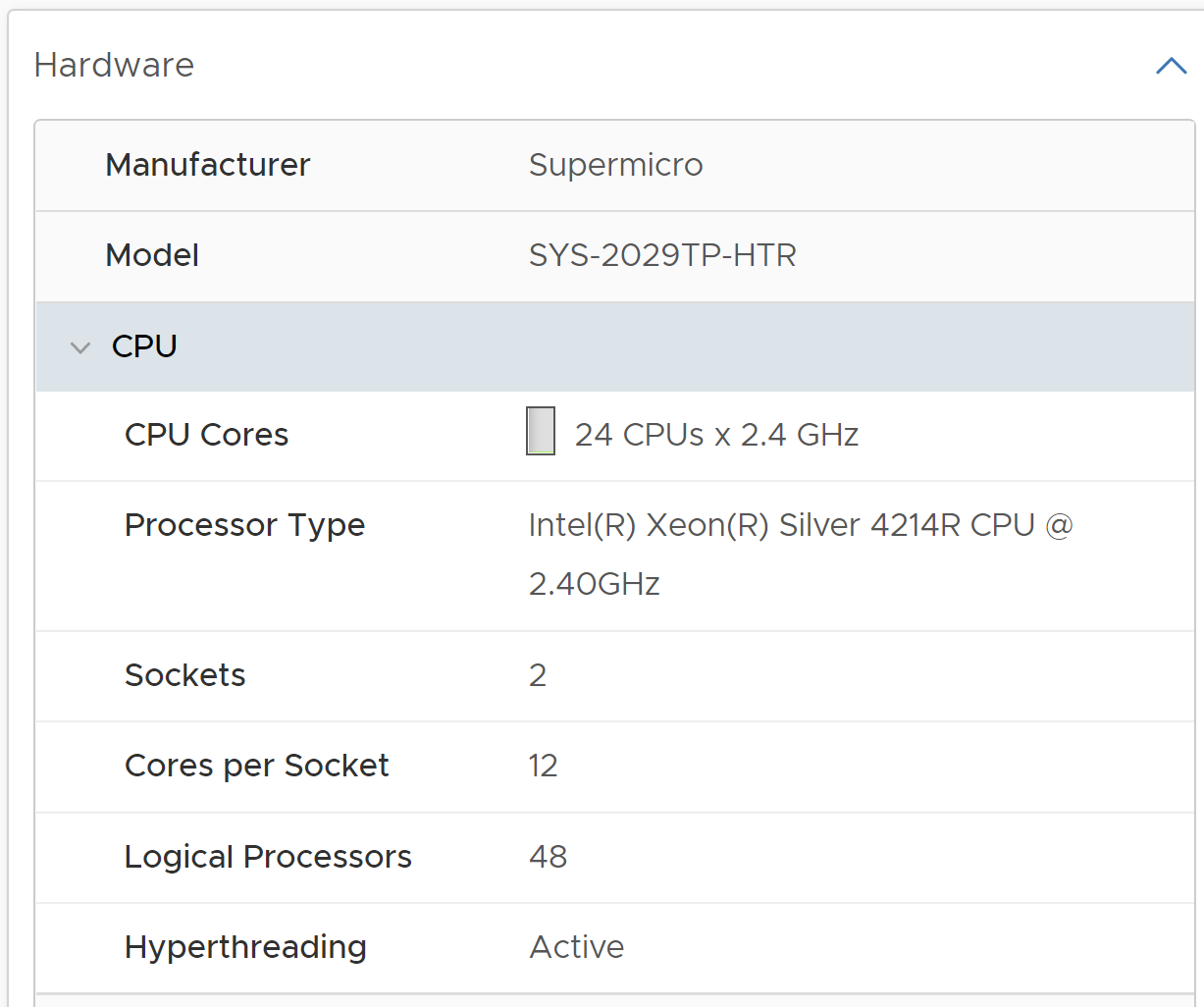 Next, you must edit the settings on the Virtual Machines to assign 24 vCPU and 24 GB RAM to each of the two Conferencing Nodes.

Ensure that the server actually has 24 GB of RAM connected to each CPU socket. Since all four memory channels should be populated with one RAM module each, you will normally require 4 x 8 GB per CPU socket. 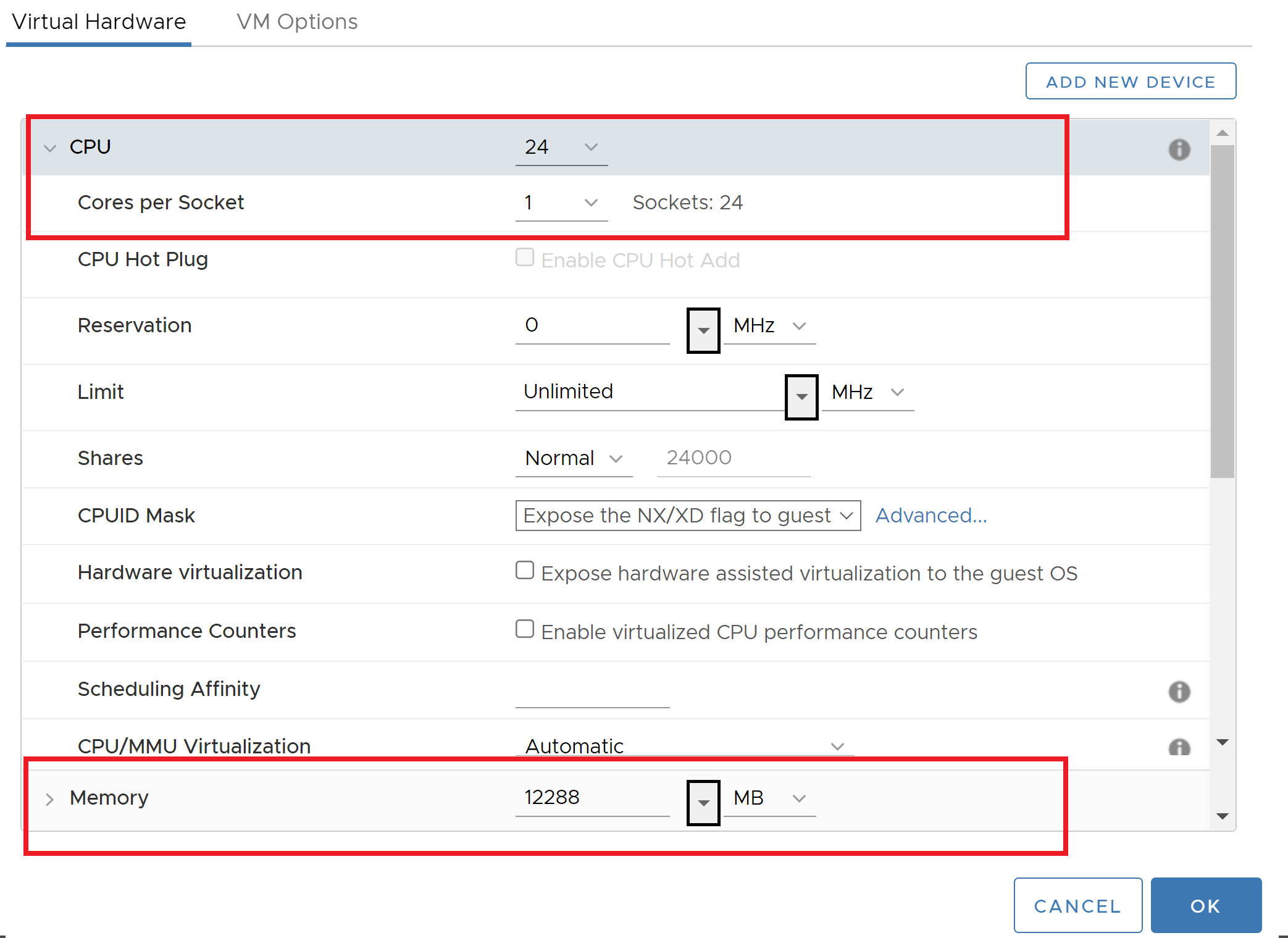 Finally, save and boot up your virtual machines. After about 5 minutes they should be booted, have performed their performance sampling, and be available for calls.

A successful run of the above example should return something like:

An unsuccessful run, where VMware has split the Conferencing Node over multiple NUMA nodes, would return the following warning in addition to the result of the performance sampling:

If you have followed the steps in this guide to set NUMA affinity correctly and you are getting the warning above, this could be due to another VMware setting. From VMware, select the Conferencing Node and then select Edit settings > Options > General > Configuration parameters...). The numa.autosize.vcpu.maxPerVirtualNode option should be set to your "magic number". For example, 24 is our "magic number" - the number of logical processors, or vCPUs, assigned in our example.

If this option is set to anything lower, e.g. 8, 10 or 12, VMware will create two virtual NUMA nodes, even if locked on one socket.

Ensure all BIOS settings pertaining to power saving are set to maximize performance rather than preserve energy. (Setting these to an energy-preserving or balanced mode may impact transcoding capacity, thus reducing the total number of HD calls that can be provided.) While this setting will use slightly more power, the alternative is to add another server in order to achieve the increase in capacity, and that would in total consume more power than one server running in high performance mode.

The actual settings will depend on the hardware vendor; see BIOS performance settings for some examples.

A quick way to verify that BIOS has been set appropriately is to check the hardware's Power Management settings in VMware (select the host then select Configure > Hardware > Power Management). In most cases, the ACPI C-states should not be exposed to VMware when BIOS is correctly set to maximize performance.

If the ACPI C-states are showing in VMware (as shown below), the BIOS has most likely not been set to maximize performance :

When BIOS has been correctly set to maximize performance, it should in most cases look like this:

As well as the physical restrictions discussed above, the hypervisor can also impose restrictions. VMware provides virtual NUMA nodes on VMs that are configured with more than 8 CPUs. If you have fewer than 8 CPUs, you should change this default by setting numa.vcpu.min in the VM's configuration file to the number of vCPUs you wish to configure (which will be double the number of CPUs you have available).