There are many factors that can affect the performance of Virtual Machines (VMs) running on host hardware. One of these is how the VM interacts with NUMA (non-uniform memory access).

This section provides an overview of NUMA and how it applies to Pexip Infinity Conferencing Nodes. It summarizes our recommendations and suggests best practices for maximizing performance. 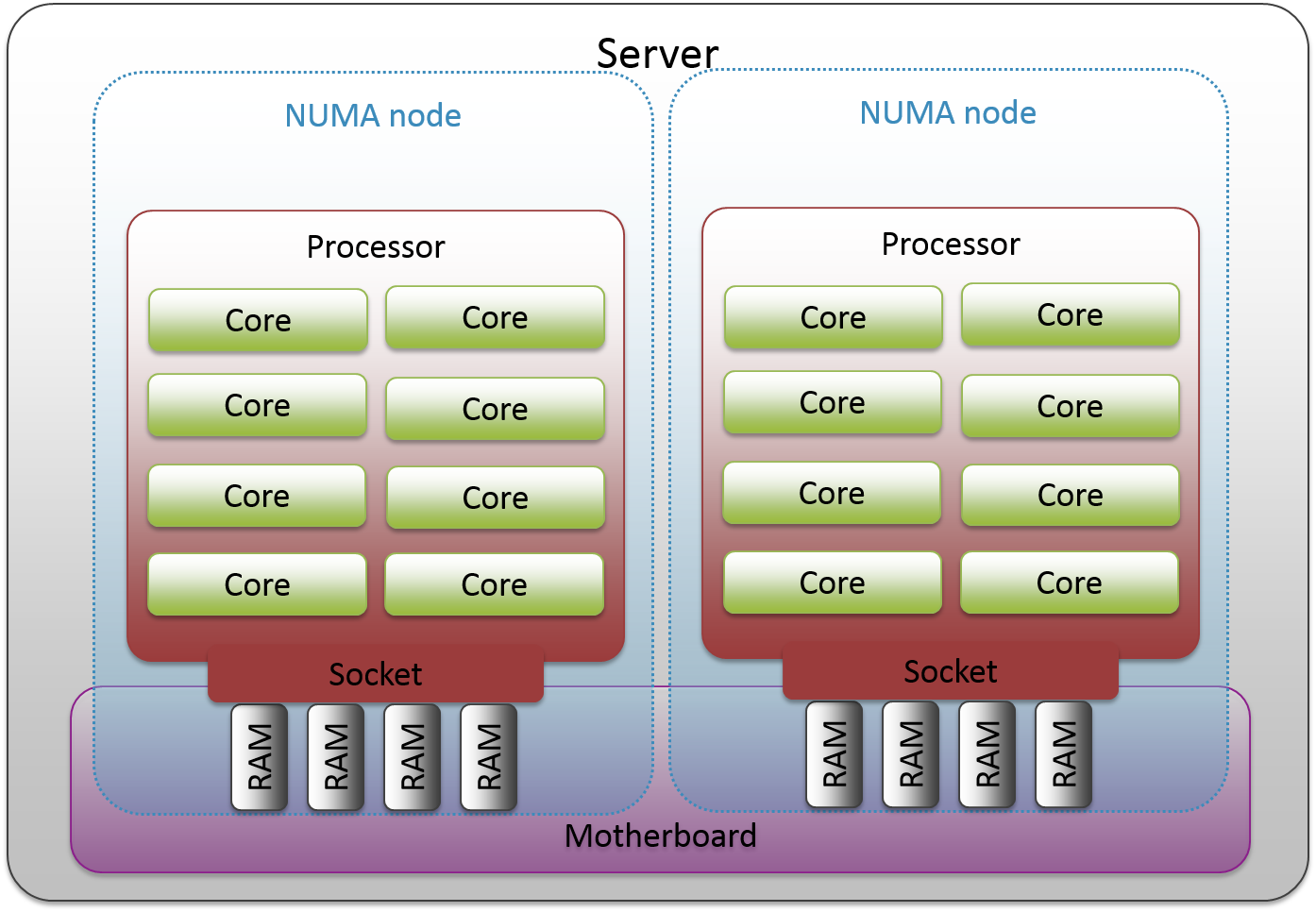 The diagram (right) outlines the physical components of a host server and shows the relationship to each NUMA node.

We strongly recommend that a Pexip Infinity Conferencing Node VM is deployed on a single NUMA node to avoid the loss of performance incurred when a core accesses memory outside its own node.

In practice, with modern servers, each socket represents a NUMA node. We therefore recommend that:

This second diagram shows how the components of a Conferencing Node virtual machine relate to the server components and NUMA nodes.

You can deploy smaller Conferencing Nodes over fewer cores/threads than are available in a single socket, but this will reduce capacity.

Deploying a Conferencing Node over more cores (or threads when pinned) than provided by a single socket will cause loss of performance, as and when remote memory is accessed. This must be taken into account when moving Conferencing Node VMs between host servers with different hardware configuration: if an existing VM is moved to a socket that contains fewer cores/threads than the VM is configured to use, the VM will end up spanning two sockets and therefore NUMA nodes, thus impacting performance.

To prevent this occurring, ensure that either:

You can utilize the logical threads of a socket (hyperthreading) to deploy a Conferencing Node VM with two vCPUs per physical core (i.e. one per logical thread) to achieve up to 50% additional capacity.

Affinity does NOT guarantee or reserve resources, it simply forces a VM to use only the socket you define, so mixing Pexip Conferencing Node VMs that are configured with NUMA affinity together with other VMs on the same server is not recommended.

NUMA affinity is not practical in all data center use cases, as it forces a given VM to run on a certain CPU socket (in this example), but is very useful for high-density Pexip deployments with dedicated capacity.

NUMA affinity for Pexip Conferencing Node VMs should only be used if the following conditions apply:

For instructions on how to achieve NUMA pinning (also known as NUMA affinity) for your particular hypervisor, see:

We are constantly optimizing our use of the host hardware and expect that some of this advice may change in later releases of our product. However our current recommendations are: