After you have installed and configured your Teams Connector there are several maintenance tasks you may need to perform, such as adding extra Conferencing Nodes, changing your call capacity or upgrading the platform to the latest software version.

If you need to change the configuration on the Teams Connector after it has been deployed, you must make the necessary changes to the variables in your initialization script and then redeploy it using the new configuration, as described below. Configuration changes that require redeployment include:

Upgrading the Teams Connector to the latest software

When upgrading the Teams Connector to version 29, you must redeploy it using your original variables initialization script (although you may apply any configuration changes, if required), and with the latest application software files and v29 redeployment script, as described below.

When upgrading your Teams Connector to version 29:

If you are currently running version 26, as with Pexip Infinity, you should also upgrade your Teams Connector to version 27 before upgrading your entire platform to v29. See our previous documentation for information about the upgrade steps and the changes introduced in v27.

Summary of script changes between versions

There are no changes to the variables script.

There are no changes to the install and redeploy scripts (other than line 4 that tests that the correct software version number is being used).

Install script: the steps at the end of the install script requesting you to set up a DNS CNAME record for your Teams Connector hostname now ask you to create a DNS A-record instead.

Redeploy script: the steps at the end of the install script requesting you to check/change your DNS CNAME record have been removed.

Previously we recommended using a CNAME record pointing to the Teams Connector's public IP address FQDN. However, this is no longer required and an A-record may be used instead. Existing deployments that use a CNAME will still work, but that can be replaced with an A record (by pointing the hostname of your Teams Connector ($PxTeamsConnFqdn) to the Public IP address of the load balancer), if you want to align your DNS process with our latest guidelines.

Redeploy script: the redeploy script contains a new section prior to the New-AzResourceGroup command to create the resource group for the new Teams Connector instances (VMSS). the dynamic Azure resource groups for you (those named <prefix>-TeamsConn-<region>-RG that contain the existing Teams Connector instances). This means you no longer have to perform this step manually via the Azure portal when upgrading or redeploying.

The Teams Connector redeployment process described below is required when you want to:

Note that there is no need to backup the Teams Connector as there are no specific settings, status or history information to preserve — if the deployment is lost you can just reinstall it with this redeploy process.

There are three main steps to redeploying the Teams Connector:

Before running your scripts we recommend that you check the Azure status (https://status.azure.com) for your region. Any ongoing issues in your region with the Azure services used by the Teams Connector could cause the script to fail.

The redeployment steps are shown in the following diagram and are then described in detail below. 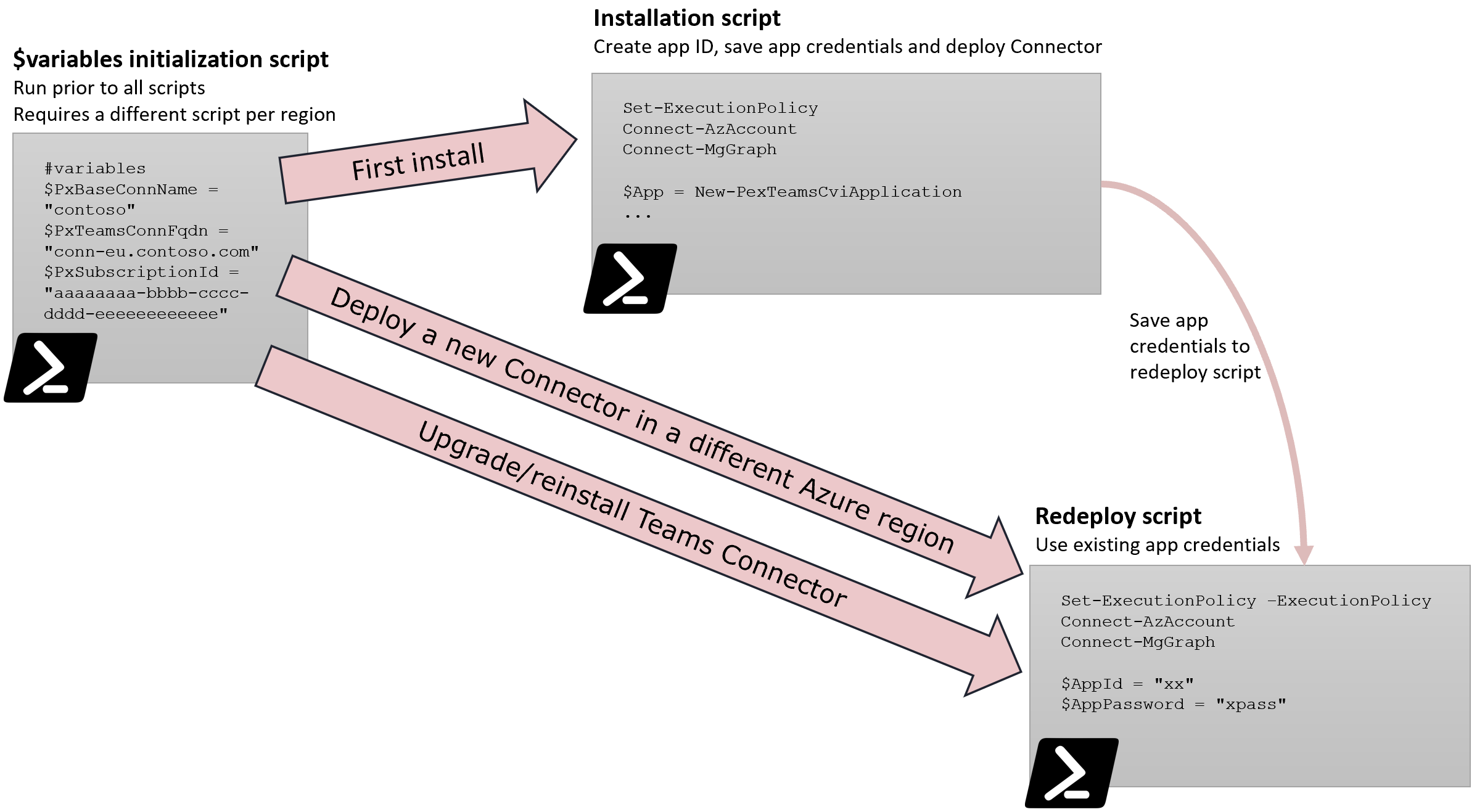 These steps must be performed by the Owner of the Azure subscription used for the Teams Connector.

To redeploy the Teams Connector:

This is the redeploy script. It is a variation on the installation script that only performs the necessary commands to redeploy the Teams Connector. As with the initial installation, we recommend running each group of commands step-by-step within PowerShell.

This script applies to software version 29. If you are using an earlier version you should refer to our previous documentation.

The person who will be performing the deployment must have Owner permissions for the API app.

When necessary, the following script can be used by the current Owner to assign the Owner permission to another user.

Note that you must have run the variables script to assign the $TeamsConnectorApiApplicationId variable and you must replace <email_name> in the script with the email address / user principal name of the person who will perform the remaining installation steps.

Write-Host "To give consent to the CVI app, go to: $AdminConsentUrl"

Note that if you run the above commands in a new window/session you will first need to run the PowerShell variables initialization script.

To change the workstation / management network addresses that can provide consent for the Teams Connector CVI app (the addresses that were initially specified in $PxConsentSourceAddressPrefixes):

For example, if you have a Teams Connector deployed as shown in Certificate and DNS examples for a Microsoft Teams integration i.e.

and you want to add a new Conferencing Node px03.vc.example.com, you would have to:

If you need to remove a Conferencing Node from the pool for any reason, you do not need to make any immediate changes to your Teams Connector / Azure configuration. However, you should make any necessary changes to the $PxNodesSourceAddressPrefixes variable in your stored initialization script to keep it in sync with your actual deployment.

You can use the Set-CsVideoInteropServiceProvider command to change the alternative dialing instructions or the IVR address (TenantKey).

You can update the webpage of "Alternate VTC dialing instructions" that the recipient of the meeting invite can look at, by adding or removing some of the address types that are displayed.

You do this by using the Set-CsVideoInteropServiceProvider command and supplying a new InstructionUri parameter, following the same rules as described when you first created the service provider.

In our original example, the service provider was created with the command:

To change the instructions to remove the "Test call" option, for example, the revised InstructionUri parameter would be "https://px.vc.example.com/teams/?conf={ConfId}&ivr=teams&d=example.com&ip=198.51.100.40&w"

and the command to apply the revised InstructionUri parameter would be:

The IVR address (TenantKey) is the alias that you assign to the Pexip Virtual Reception that is to act as the IVR gateway into the Teams meetings. In our original example this was set to teams@example.com.

To change the address you can use the Set-CsVideoInteropServiceProvider command and supply a new TenantKey parameter, for example:

Note that when using Set-CsVideoInteropServiceProvider, the first parameter is called -Identity, not -Name.

These changes may take up to 6 hours to come into effect.

Changing the call capacity of a Teams Connector

You can subsequently modify the number of instances via the Azure portal, to reflect changing capacity requirements, or if you have enabled the Azure Event Hub you can also automate/schedule changes in call capacity to suit your requirements.

When you deploy a Teams Connector, a Network Security Group (NSG) is created within Azure. The NSG includes an "RDP" rule (priority 1000) that controls RDP access to the Teams Connector instances from any addresses specified in the $PxMgmtSrcAddrPrefixes installation variable.

If no addresses were specified then a Deny rule is created instead. If you want to subsequently allow RDP access you must do a full redeploy. You cannot just convert the Deny rule into an Allow rule (as other associated Teams Connector settings also have to be modified).

You can change this rule if you want to specify a different set of management workstation addresses. To do this:

Mandating the use of Availability Zones

By default the Teams Connector uses Azure Availability Zones if they are available in the selected region. However if you want to mandate the use of Availability Zones you can add an extra parameter to the call to create_vmss_deployment.ps1 in your installation/redeployment script.

The parameter is -UseAvailabilityZones and can be set to either "BestEffort" (the default) or "Mandatory".

This section describes how to completely remove a Teams Connector installation, for example if you have a test system that you no longer need.