This topic describes the server hardware requirements for the Pexip Infinity platform:

The number of calls (or ports) that can be achieved per server in a Pexip Infinity deployment will depend on a number of things including the specifications of the particular server and the bandwidth of each call. For more information, see Capacity planning.

As a general indication of capacity:

Servers that are older, have slower processors, or have fewer CPUs, will have a lower overall capacity. Newer servers with faster processors will have a greater capacity. The use of NUMA affinity and Hyper-Threading can significantly increase capacity.

The type of processors and Hypervisors used in your deployment will impact the levels of performance you can achieve. Some known performance considerations are described below.

Pexip Infinity can make full use of the AVX2 and AVX512 instruction set provided by modern Intel processors. This increases the performance of video encoding and decoding.

The VP9 codec is also available for connections to Conferencing Nodes running the AVX2 or later instruction set. VP9 uses around one third less bandwidth for the same resolution when compared to VP8. Note however that VP9 calls consume around 1.25 times the CPU resource (ports) on the Conferencing Node.

We have observed during internal testing that use of AMD processors results in a reduction of capacity (measured by ports per core) of around 40% when compared to an identically configured Intel platform. This is because current AMD processors do not execute advanced instruction sets at the same speed as Intel processors.

AMD processors older than 2012 may not perform sufficiently and are not recommended for use with the Pexip Infinity platform.

There must be an equal amount of memory per socket, and all sockets must have all memory channels populated (you do not need to populate all slots in a channel, one DIMM per channel is sufficient). Do not, for example, use two large DIMMs rather than four lower-capacity DIMMs — using only two per socket will result in half the memory bandwidth, since the memory interface is designed to read up from four DIMMs at the same time in parallel 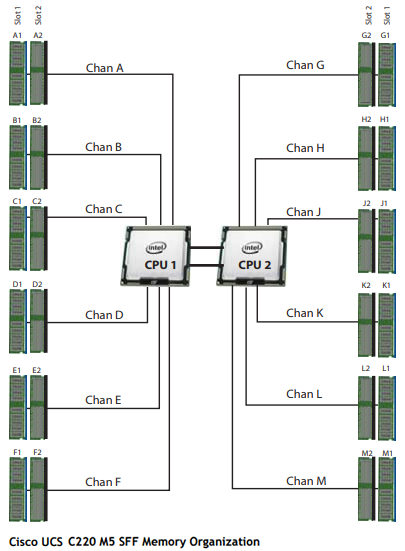