This guide demonstrates the participant experience when viewing Microsoft Teams live events from the viewpoint of 4 different types of participant.

It focuses on highlighting the interaction of the Microsoft Teams client experience (Producer, Presenter and Attendee roles) together with a standards-based video endpoint in Presenter role. Given the differences in user experience of a Teams client and the information available via the CVI API, it’s important to understand the experience of the VTC endpoint when participating as a Presenter in a live event to ensure an optimal experience. This guide provides recommendations for running a live event with a VTC-based Presenter.

This is not an exhaustive guide to the Teams live event experience, nor does it cover the Organizer role.

For more information and a walkthrough of the feature see the Pexip video at https://youtu.be/DKGoXhvC3JI.

When referring to the example event and screenshots within this guide:

We recommend that you observe the following best practices for VTCs in Teams live events:

This diagram provides an overview of the Teams live event experience:

VTC systems join the Teams live event in the Presenter role. Therefore they can share live audio, video and content. VTC systems are not recommended for use as “general attendees” given their live status in the event – it prevents accidental microphone un-mute issues. 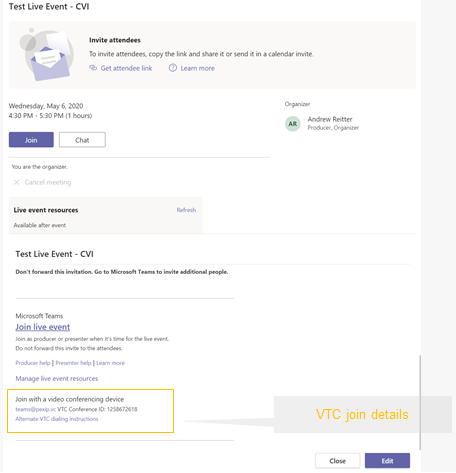 The view as seen from the various roles in the demo

There are 4 primary roles during a Teams live event:

During pre-live the producer and presenters can talk together like in a normal Teams Meeting without being broadcast to the viewers.

The meeting is still in pre-live mode, but Producer and other Presenters can see the “Send live” video. Note that the Producer and Presenter roles are in a “normal” Teams meeting and that when they speak the video pane switching behavior is the same as a normal meeting. Therefore it is important for everyone to mute their microphones except the active presenter before going live with the event.

All presenters can see each other, but only the selected user is shown to the attendees. Everyone can be heard, so mute your microphones!

For the best “start of stream” experience for the VTC, the Producer should cue up an intro slide and make this active when Starting the event. This is typical of hosted events and allows the Producer to:

Keep in mind that the VTC is in a normal Teams meeting from its perspective therefore it will receive content as a normal content share in addition to in the “Live event bot” video pane. This is the reason for the small content share window in the lower right on the VTC system – it has been minimized to simplify the view for the VTC presenter.

All presenters can see each other, but only the selected content is shown to the attendees, in this case it’s the introduction slide. Everyone can be heard, so mute your microphones!

When the VTC Presenter is being streamed live they see themselves in the “Live events bot” pane. The VTC user can turn their own VTC system selfview on or off to know what they are sending.

The VTC systems is in a normal Teams meeting from its point of view, therefore it receives dual stream with video and content. The content also appeared here prior to being picked by the Producer to send into the meeting (as it should for any Presenter). The VTC sees the mixed content+speaker back from the Live events bot. Content can be shared from VTC or Teams Producer/Presenter. The Producer can show only content or content + one video stream. They do not have to originate from the same source, as shown here.

We recommend that VTC Presenter allows the Producer to change the stream source before stopping the VTC based content share.

When the stream has ended, this is indicated to the presenters, producer and participants – at this point the Producer/Presenters/VTCs can do a quick debrief, this is not streamed to users / recorded.