Third-party systems can connect to Teams meetings via the Infinity Gateway either via a Virtual Reception (IVR) or by dialing the conference directly.

The key features of Pexip's CVI integration with Microsoft Teams are:

Note that Microsoft Teams is inherently a dial-in service i.e. you can only dial from a third-party video system into Teams. You cannot dial out from Teams to a SIP, H.323 device etc — instead, you have to send the relevant joining instructions/invitation to the user of that device.

All VTC-based participants (SIP and H.323 devices) can either access the Teams conference via a customizable Virtual Reception service which prompts them to enter the Conference ID of the conference they want to join, or they may also be able to dial an address that takes them directly into a specific conference. Other software-based clients such as Skype for Business or Pexip's own Connect apps can also join via direct dial or via a Virtual Reception.

Pexip Infinity’s deployment model allows the use of a customer-specific domain such as teams@example.com for dialing the Teams Virtual Reception. 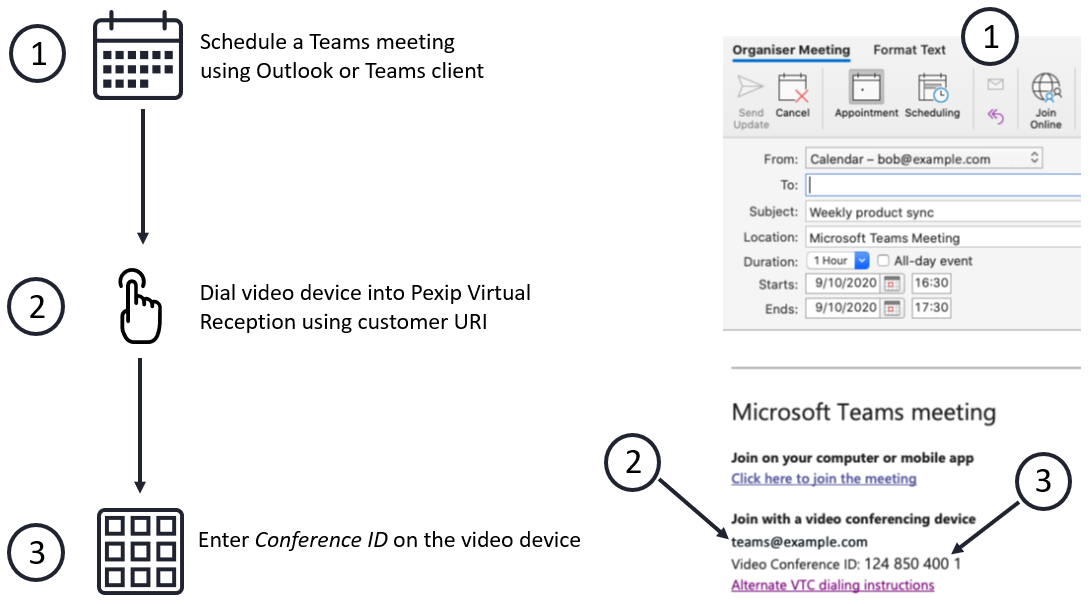 Alternative VTC dialing instructions can be provided that are customized to the company network and workflow such as:

Participants using a Teams client join a Teams meeting as usual, and any gatewayed third-party participants can be seen and heard in the same way as any other directly-connected Teams clients in that meeting.

Authenticated, trusted VTCs that are located within the organization can join the conference directly, without any additional user interaction, whereas unauthenticated, untrusted external VTCs are admitted via the Teams lobby.

Join workflow from a Microsoft Teams client into a Teams meeting

Admitting guest participants from the lobby

Any VTC participants that are already in the conference are notified when an untrusted VTC or guest Teams client enters the Teams lobby. They see an on-screen message and hear a knock-knock sound. 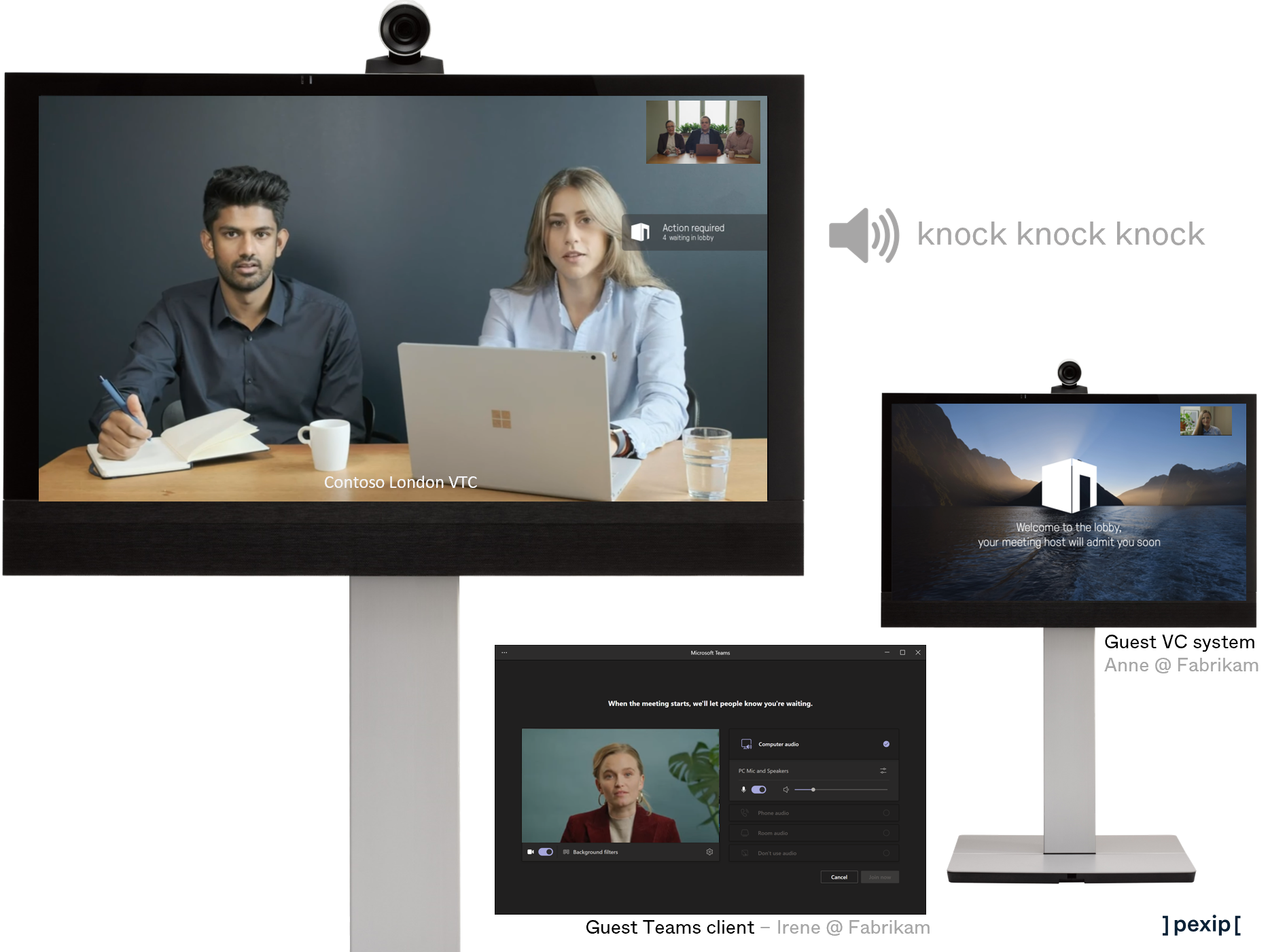 The meeting host can then use their Teams client to admit the waiting guests (the VTC system cannot admit guests).

Teams users who are logged in and have joined via audio-only are represented by an avatar (supplied by Exchange Online) within the VTC's conference layout. If no avatar is available, or it is a guest user from another organization, a substitute graphic is generated based on the participant’s initials. 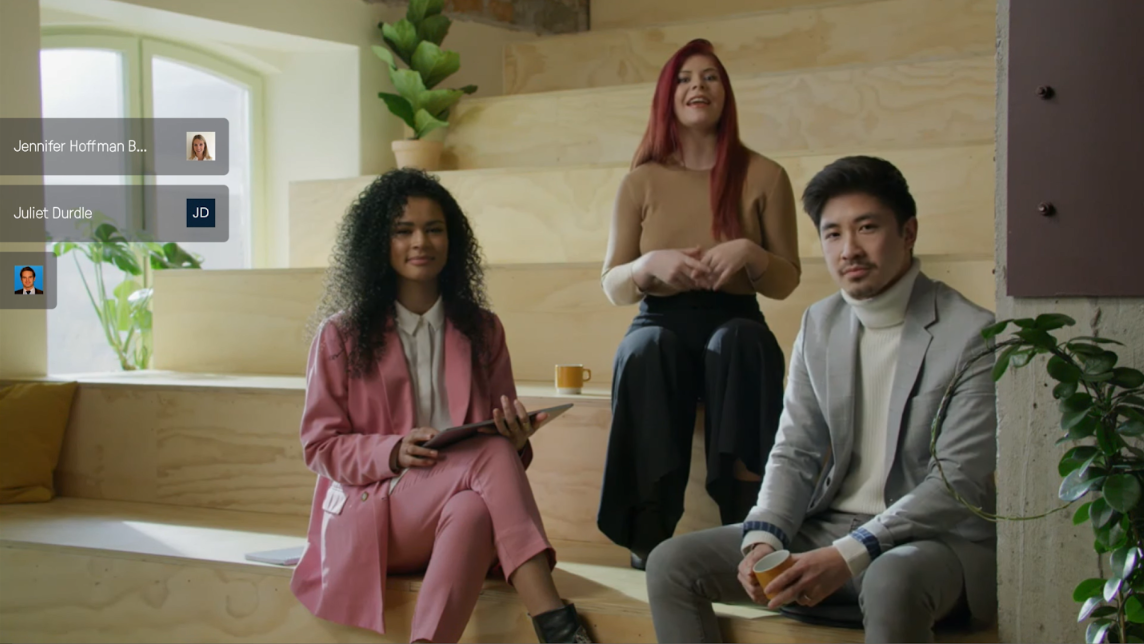 Notifications are shown to any VTC participants if a Teams participant raises their hand. An indicator slides out over the conference layout that identifies the participant with the raised hand and remains visible until the participant's hand is lowered. 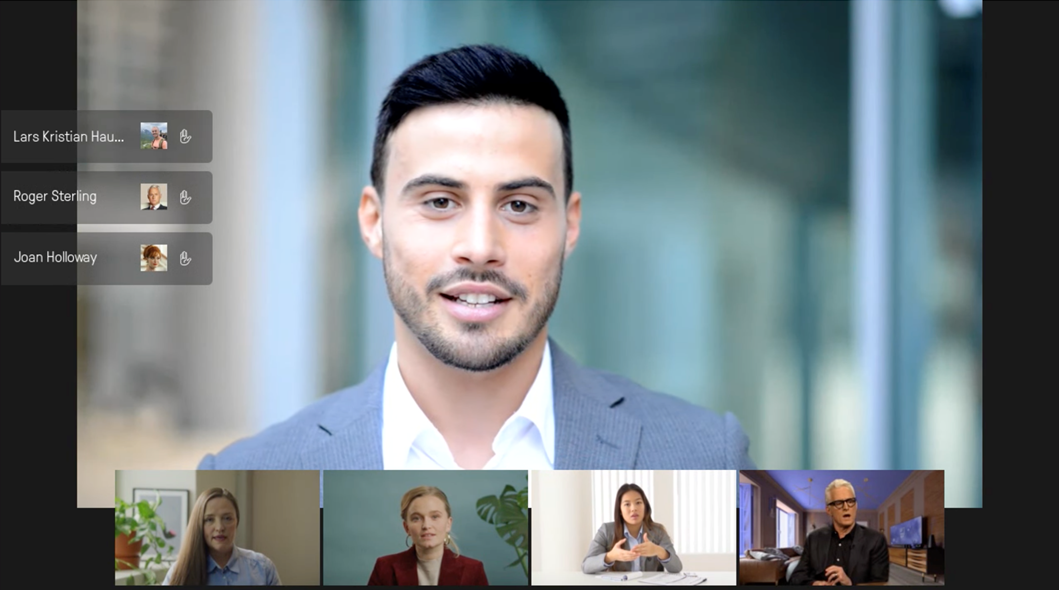 Up to 3 indicators may be displayed, in the order that the hand was raised, with the oldest at the top. If there are more than 3 hands raised then the third indicator also shows the number of additional raised hands.

Note that you cannot use the Connect apps to lower the hand of a Teams participant.

Recording or transcribing a Teams conference

If a Microsoft Teams conference is recorded or transcribed, relevant audio prompts indicating that recording/transcribing has been started/stopped are played to callers who are gatewayed via Pexip Infinity into the conference.

Migrating to Microsoft Teams from Skype for Business

Pexip Infinity works simultaneously with both Microsoft Teams and Skype for Business. This means that users can be enabled to use both platforms and they can be migrated from one platform to the other at your own pace. Interoperability into either platform is handled by the same single Pexip Infinity installation, and the same Conferencing Nodes.

For example you could provide a dial-in lobby address of:

and then in each case the user would be directed to the appropriate Pexip Virtual Reception and would enter the appropriate conference ID for the relevant Microsoft meeting platform.

Microsoft Teams supports some level of interoperability with Skype for Business. This includes the ability to do a point-to-point voice and video call between Microsoft Teams and Skype for Business (depending on SfB/Teams setup, see https://docs.microsoft.com/en-us/microsoftteams/teams-and-skypeforbusiness-coexistence-and-interoperability#native-interop-experiences).

As Pexip supports native Skype for Business federation, it is technically possible to place a call between a Teams client (if the tenant is set up in a supported mode for SfB federation) and Pexip. However due to the limitations of this interoperability, in particular the lack of support for screen sharing / app sharing between Microsoft Teams and Skype for Business, this is not a use case that Pexip recommends or provides support for.

The certified interoperability for Microsoft Teams is for a Teams meeting to be scheduled (by an organization enabled for Pexip interoperability), and non-Teams compatible systems to dial in to the Teams meeting (see user experience below). This type of integration allows dual stream content sharing.

You can use Pexip Infinity as an external RTMP encoder for your Teams live events, which means that you can stream video, audio and presentation content from your videoconferencing meeting room systems directly into the event.