You can configure the Pexip Infinity platform to authenticate and authorize administrator login accounts via a centrally managed LDAP-accessible server. Integration with LDAP provides increased security, better auditing of changes and more control and flexibility as you can assign different privileges to specific groups of users.

By default, Pexip Infinity only has a single local administrator account. Integration with an LDAP directory service allows multiple users to administer the platform. These users log in with their directory credentials, which is generally a Windows AD domain. When using LDAP:

All usernames and passwords are case sensitive.

To enable authentication and authorization via LDAP, you need to configure both the LDAP database (if it is not already configured with user details) and the Pexip Infinity platform.

The LDAP database must be configured with:

The Pexip Infinity platform must be configured with:

If a secure TLS connection between the LDAP server and the Management Node is required, ensure that:

The Pexip Infinity platform configuration steps for specifying an LDAP authentication source, and configuring administrator and LDAP role mappings are described in more detail in the following sections, and there is an example that shows how to configure permissions for an AD group. For information about installing server and trusted CA certificates, see Managing TLS and trusted CA certificates.

Configuring how administrators are authenticated

If authentication against an LDAP database is configured, you can save the settings only if Pexip Infinity can successfully contact the specified LDAP server.

Note that all LDAP distinguished names must be entered as per the LDAP standard (RFC 4514). LDAP configuration is case insensitive.

To allow members of a nested Active Directory security group to log in over LDAP:

(This configuration uses the LDAP_MATCHING_RULE_IN_CHAIN OID. More information on this can be found at https://msdn.microsoft.com/en-us/library/aa746475%28VS.85%29.aspx.)

When an administrator has restricted permissions, all navigation menu options are still displayed, but they are given an Access denied message if they try to select a menu option that they are not authorized to use. For read-only restrictions, the relevant Add <item> options are not displayed.

Two roles are present by default:

Descriptions of all available administrator permissions

The table below describes each of the permissions that can be applied to an administrator role:

These examples show how you can configure the specific actions (permissions) that all members of an AD group are allowed to perform when administering Pexip Infinity, and provide methods to filter the groups that are displayed.

The filtering options are not mandatory but they do make it easier to select the appropriate LDAP groups, and can optimize system performance.

Let's assume that you have the following set of groups already configured in Windows Active Directory:

In both of the examples below you need to ensure that you have configured an LDAP authentication source (Users & Devices > Administrator authentication) that can access your AD server, for example: 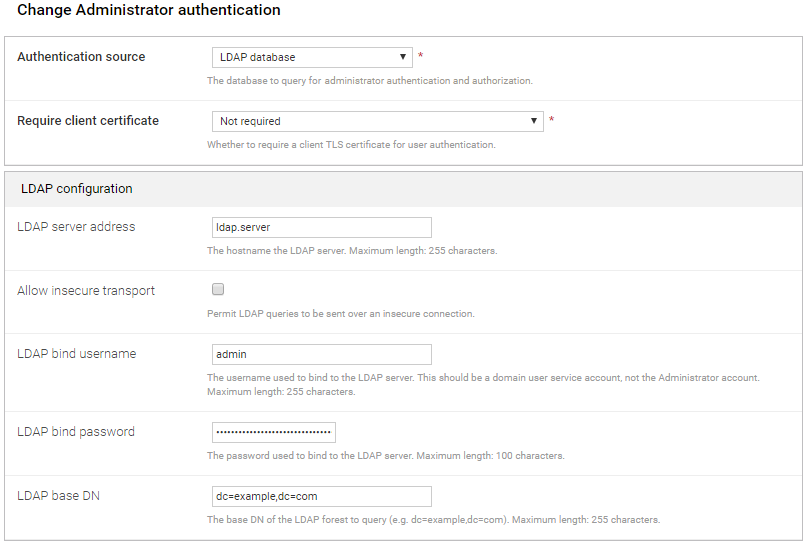 This example shows how to configure all AD users who are members of the "itadmins" group to be able to add, modify and delete VMR/conference related settings, but only be able to view other configuration aspects of Pexip Infinity (system settings, logs etc).

To make it easier to select the "itadmins" group we have specified an LDAP group search DN to limit the number of LDAP groups that are presented when configuring your LDAP roles:

This means that AD users who are in the itadmins group can now sign in to the Pexip Infinity Administrator interface, using their AD credentials, and configure service-related settings only.

To set up different permissions for members of other AD groups, repeat steps 3 and 4 to create different administrator role and LDAP role associations.

This example is similar to the example above, but shows an alternative method of limiting the number of LDAP groups that are presented when configuring your LDAP roles.

In this case we show how to specify an LDAP group filter to limit the groups that are displayed.

This means that AD users who are in the vCenterAdmins group can now sign in to the Pexip Infinity Administrator interface.

If necessary you can reinstate access via the Pexip Infinity local on-box database, so that administrators can log in via the default account (typically admin) and will have full administrator privileges. You may need to do this if, for example, the Authentication source is configured as LDAP database and your connectivity to the LDAP server goes down or your credentials become invalid.

You can also disable client certificate authentication so that you can log in to the Pexip Infinity Administrator interface via the standard login page.

If you forget the password for the Pexip Infinity Administrator interface, you can re-run the installation wizard, being sure to change only the Web administration password setting.